Chinese herbs may seem exotic to those of us new to herbal medicine, but they are indeed more common in Western culture than we realize! Of course, there are many herbs that are unfamiliar to us, like Rehmannia and Gentiana, but there are so many that you probably use on a regular basis in your own kitchen. Remember that Chinese herbology describes individual herbs as having specific tastes, temperatures and functions. In understanding these functions of each herb can help guide your decision for your next recipe. 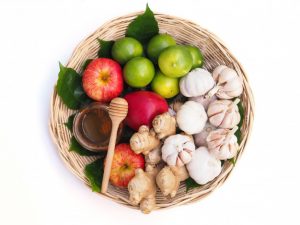 Ginger: There are 2 types that we use in TCM—fresh (sheng jiang) and dried (gan jiang). Fresh ginger is warm and dries up mucus and excess phlegm. Gan jiang is hot and is used in more severe cold cases. (From long tern deficiency, for example)
Cinnamon: Two different parts of the herb are used. The branch (gui zhi) is used for treating colds and flus where the person experiences chills and sinus congestion. Cinnamon bark (rou gui) is used in a similar manner as dried ginger (in cases of severe cold)
Scallion (Cong Bai): Warm and spicy, it is used in early stages of a cold to expel wind.
Fermented Soybean (Dan Dou Chi): MISO! Used to expel early stages of wind (a common cold) and can be either warm or cold, depending on how its prepared.
Garlic (Da Suan): Used in TCM to expel parasites, although its unclear which parasites exactly. The modern understanding of garlic includes its anti-inflammatory and antibacterial properties.
Honey (Feng Mi): Used to tonify Qi and moisten the lung.
Aloe (Lu Hui): Bitter and cold, aloe is used as a laxative in cases of mild to moderate constipation.
Goji Berry (Gou Qi Zi): Used to nourish the blood and benefits the eyes and yin.
Rhubarb (Da Huang): Used to clear heat in the intestines by promoting bowel movements.
Chrysanthemum (Ju Hua): Cool and spicy, it is used to expel warm pathogens, resolve toxicity and benefits the eyes.
Dandelion Root (Pu Gong Ying): Clears toxic heat, which translates to rashes and abscesses. Specifically identified to drain breast abscesses.
When herbs are used in formulas, they are combined in a strategic method as a means of maximizing and complementing each other. Dose is also something to consider, which is important to remember when enjoying your next slice of rhubarb pie.